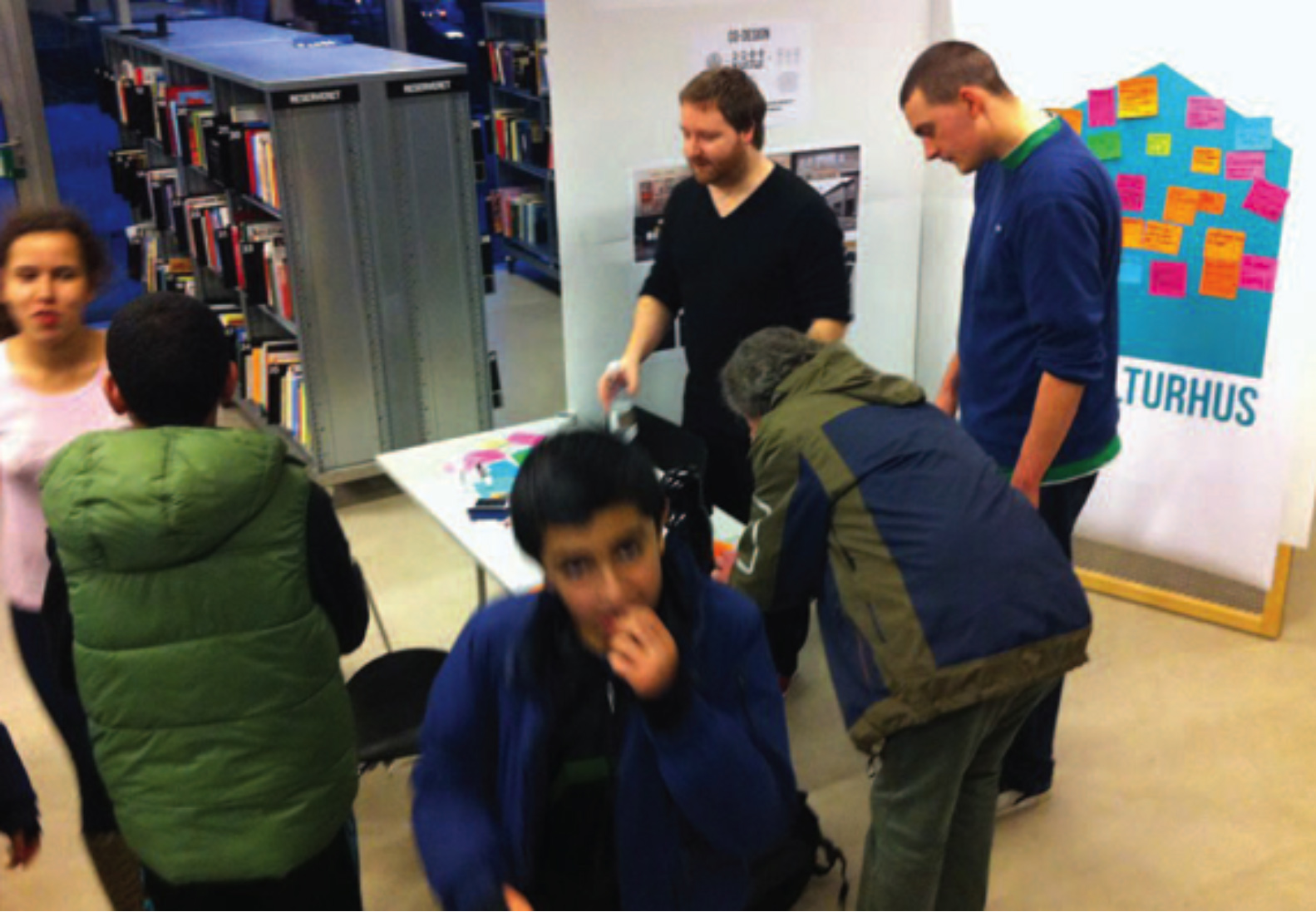 From September 2014 – January 2015 12 new master students in codesign has explored a series of democratic design experiments together with citizens, library and cultural workers in Copenhagen. Here you can read more about their brief.

Codesign brief – September 2014
What can we do together as citizens? How does citizenship authorize us to take initiatives and become responsible for what happens in our neighborhood? Can we act as citizens without being representatives and can we collaboratively join forces to actually make what we envision?

Democracy is about experimentation. New issues are raised and publics are formed where citizens are concerned and committed to participate in experiments. But citizens are not alone. We have public institutions that serve and nurture citizenship. Often these institutions provide services for the citizen, but more and more they seek to co-produce with citizens.

Democratic design experiments are gatherings where citizens explore, rehearse and prototype answers to common challenges. This can be the vitalization of a local square, the set-up of a new platform for organizing cultural events, a re-design of the library to make it a learning space for school kids or the formation of a network of volunteers that will work with health and quality of life in the neighborhood. Codesigners have an important role to play in staging such design experiments with citizens and public institutions.

4 Copenhagen neighborhoods offer venues democratic design experiments
The cultural centers and libraries of 4 Copenhagen neighborhoods invite the codesign program to facilitate democratic design experiments that bring citizens and neighborhood institutions closer together. In the area Nord Vest they envision that these experiments can make a new square in front of the library an active and vibrant place for very different people to gather. They also want to know how teenage boys can produce community media news. They will explore how to set up a new community center bringing together people with and without mental illnesses. At Østerbro they see a need for more cross overs between health centers and cultural centres, will citizens join such experiments and can this support volunteers? At Nørrebro they hope to see experiments that enhance and extend existing platforms for ‘culture-makers’, can this involve also new uses of the library space also outside normal opening hours? In Vanløse they want to do more with kids also when they are in school and they want to strengthen the involvement of volunteers. 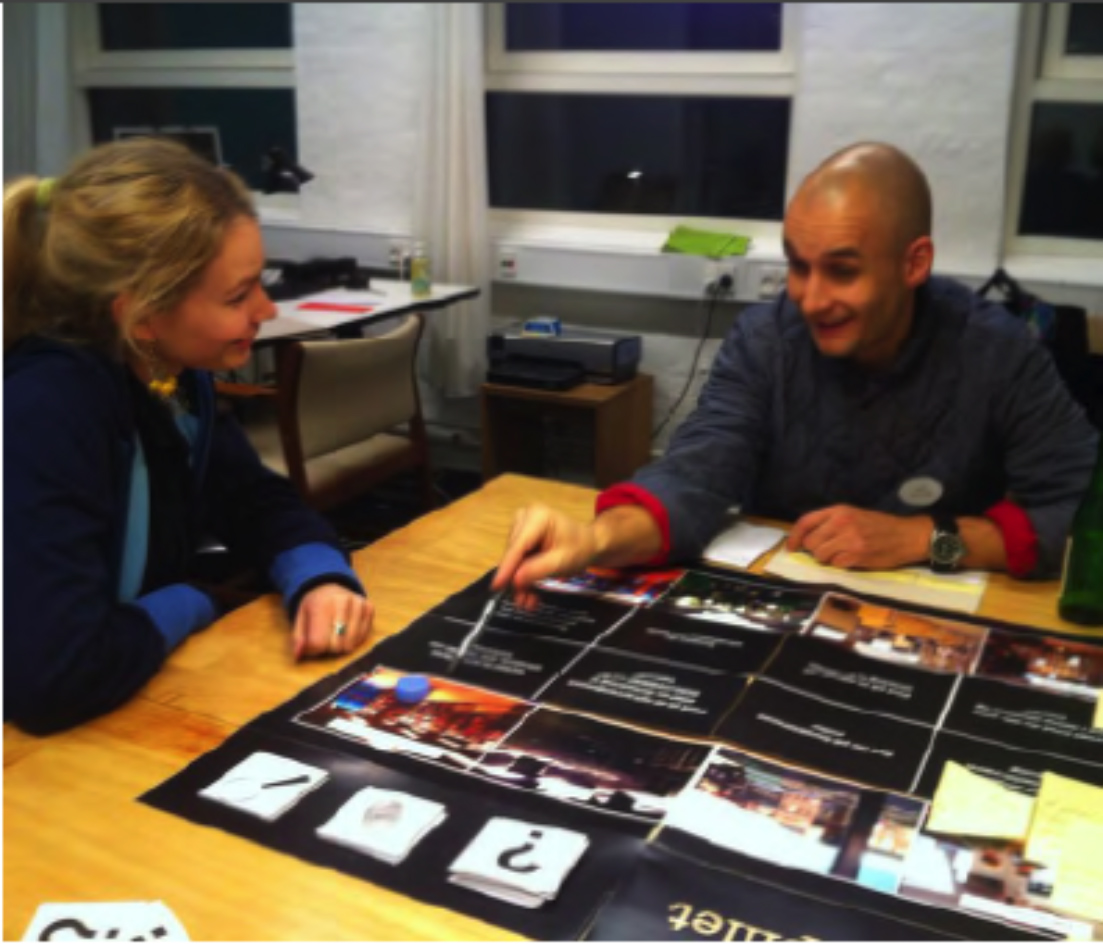 A mystery game helped cast some light on what is happening at the library in the evening when the employees are not present in the library. From earlier project made by Claire Donohoe and Signe H. Willersted.

From co-research to codesign to co-production
For 19 weeks you will as codesign students work to co-research, co-design and co-produce new neighborhood activities in the 4 Copenhagen Neighborhoods. We have an invitation but you have to find out what to make of it. For the first 4 weeks you have to research what is behind what the cultural centers have proposed and you will have to produce a newspaper that documents the research and raises issues that may engage citizens in going further.

In the next 5 weeks you will have to move from co-research to co-design. What can be done, who will take part and what will you as codesigner offer that is what you have to work with in close collaboration with the cultural centers and interested citizens.
But it is not enough to make proposals for the last 10 weeks new activities must be co-produced with citizens and cultural institutions in order to make a change in the neighborhood.

A Cultural scene. One team collaborated with Nørrebro library and co-created a multifunctional cultural scene that is now open for any citizen to use. The different kind of furniture can be put together in various ways and hereby be a new physical platform that can stage different kinds of activities. A video of their codesign process can be seen here: http://vimeo.com/117502208

Learning landscapes. One team of students explored the possibilities when the library in NorthWest of CPH gets a new venue outside its classic boundaries of a house, in the shape of a new public square. Together with culture workers from the library and three local elementary schools they created outdoor landscapes of investigations consisting of learning-boxes with tools, materials and tasks. The boxes transform the square and the library into a space in which the students can practice their various skills in everyday surroundings. See a video of a prototype session: https://www.youtube.com/watch?v=O9l-9nxibfE&feature=youtu.be

In the spring 2015 – the students will spend 10 weeks producing a book about their experiences.

The image in the top is from an earlier design research project where two students (David Christensen and Max Kemp) created a dialogue tool to support the dialogue between professional culture workers and citizens.