Dear CODE followers: From Copenhagen to London (and back again); some of what I learned when tackling service design with a co-design background

I guess, on some level, it’s human nature. When you leave one thing for another, it’s very difficult to not constantly compare and contrast. You notice the similarities and spot the differences even when that isn’t your intention. As some of you will know, approximately 2 years ago, I moved to London from Copenhagen, leaving job, home, friends and family behind to study an MA in Service Design at the Royal College of Art. This officially turned me into a Danish expatriate. Since what I set out to do in London has come to its end, I thought I’d share some personal reflections on my experience of being an “immigrant” in London, particularly in regard to moving from a Danish co-design context to a service design specialisation in the UK.

It’s no secret that I’ve been working and studying within the fields of co-design, service design, or human-centred design (as they say, we have many names for the things we love) for a while now. By living, working and studying abroad, I’ve come to understand – or more precisely, got a sense of – the difference between Danish (or Scandinavian) and English design traditions, and its influence on our discipline. By this, I don’t mean to hint at the visual and stylistic differences (though there’s ample evidence of this, too). Rather, what I sense is that the way co-design or service design has come into being has shaped and indeed still influences our perception of it. Let me explain: Although service design and co-design are closely related, and many of the methods and ways of thinking are the same, it doesn’t quite feel as though the democratic design tradition, that co-design in Scandinavia has grown out of, is mirrored in service design in the UK. Instead it seems that service design has grown out of UX or UI design, and is much more closely linked with the digital aspect of service delivery. To my mind, what sets Danish and Nordic co-design and participatory design apart from service design is its social ethos, founded on principles of equality and democracy. Whereas ‘co-design’ in Scandinavian terms often is understood as an (almost ideological) design approach, in England ‘co-design’ is often regarded as a subset of service design; a particular method of user involvement. Even if it’s difficult for me to translate it into words, these dissimilar origins make a difference. From time to time, you can feel it. It’s almost like observing traces of a different past, reflected in the way people approach and position the discipline, both consciously and unconsciously.

What service design sometimes lacks is the absolute open-ended approach to the outcome: Depending on whom you speak with, in the strictest sense, service design is tied to a service of some kind. So I ask: but what if the problem really calls for a chair? It’s fair to say that this, at times, has led me to have heated discussions with tutors as well as fellow students. That being said, what service design brings to the table is a much better understanding of the business context and systemic complexity wherein most things operate. Increasingly, service design is coupled with business design (just look at some of the prominent service design firms), and the focus on business understanding is necessary when trying to create change as a (sometimes lone) designer with or within a large organisation, private as well as public. This may seem apparent, but understanding breeds understanding, and the better you understand the context and the people you work with, the better they’ll understand you. 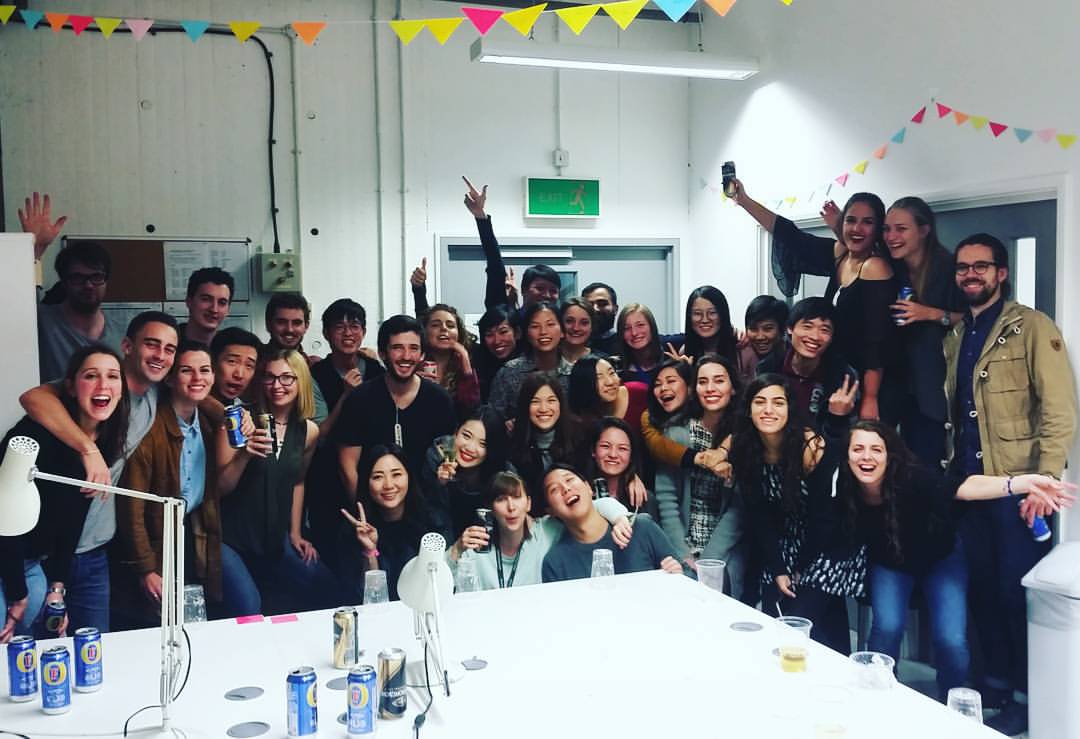 Being a foreigner in another country is both an advantage and disadvantage in many ways. When working as a service designer, it means you need to become rather good at understanding not only the people you’re working for and with, but also the cultural and national context. As an example, it’s a well-known fact that the Britons often don’t say what they mean (and I can attest to this, even if it’s not always true). In other words, you have to understand more than the mere words being spoken; you have to understand the cultural situation, the non-verbal cues, the linguistic phrases and subtle hints in tone of voice that make all the difference. It can feel as though you’re trying to grasp a sort of ‘national mentality’; national and sometimes regional customs and ways of thinking, influenced by history and embedded in the mindset of the population. Really getting to know this Britishness has also made me acutely aware of my own inherent Danishness.

On the flipside of that, being a foreigner allows you to much more easily take on the role of the curious, naïve outsider; a role which service designers and design researchers often need. As an outsider, you’ll notice other things than the culture-bound designer, and are free to question things that may seem obvious to everyone else. As long as this is done with sensitivity as well as social and cultural awareness, I find that my foreignness can be turned into a great advantage.

When speaking of cultural differences, one other thing that sets service designing in London apart from co-designing in Copenhagen is diversity. You cannot avoid it. Not surprisingly, London really is a melting pot of different cultures. Who would’ve known that by the end of my MA, I wouldn’t just have worked with more than five different partners, ranging from Royal Trinity Hospice to the Institute of Chartered Accountants, but also learned about Taiwanese and Mexican burial ceremonies and traditions, as well as recycling habits in other countries, ranging from Costa Rica to Germany. On top of that – and I’m confident that these are core life skills – I’ve also learned first-hand how to make Korean curry, and sharpen knives the Japanese way. Diversity is part of the London deal, and most of the time it enriches your experience and quality of knowledge. Occasionally, it can make things more complex. One example springs to mind: When I was working with Royal Trinity Hospice before Christmas, we were looking at coming up with a proposition and vision for taking the taboo topic of death to the high street through the vehicle of a new centre within the Northern boroughs of Trinity’s catchment area. The objective was to envision new and revised services for them to engage with new audiences earlier on. Amongst other things, we found that the way people perceive hospices played a significant role, and that this wasn’t only down to the individual person, but heavily influenced by culture and nationality, which added another layer of complexity. I won’t go into detail as that’d take a while, but the project was recently featured in the Independent (http://www.independent.co.uk/life-style/health-and-families/features/royal-college-of-art-students-collaborate-with-london-hospice-to-re-style-the-experience-of-death-a6879861.html), should you wish to read more about it. For my final MA project, I continued the collaboration with Royal Trinity Hospice, but with a different focus: How might we help people to plan for and talk about end-of-life earlier on in life? We prototyped an online service, Odds & Ends, that’ll help people do exactly that (and also won a Helen Hamlyn Design Award for it). 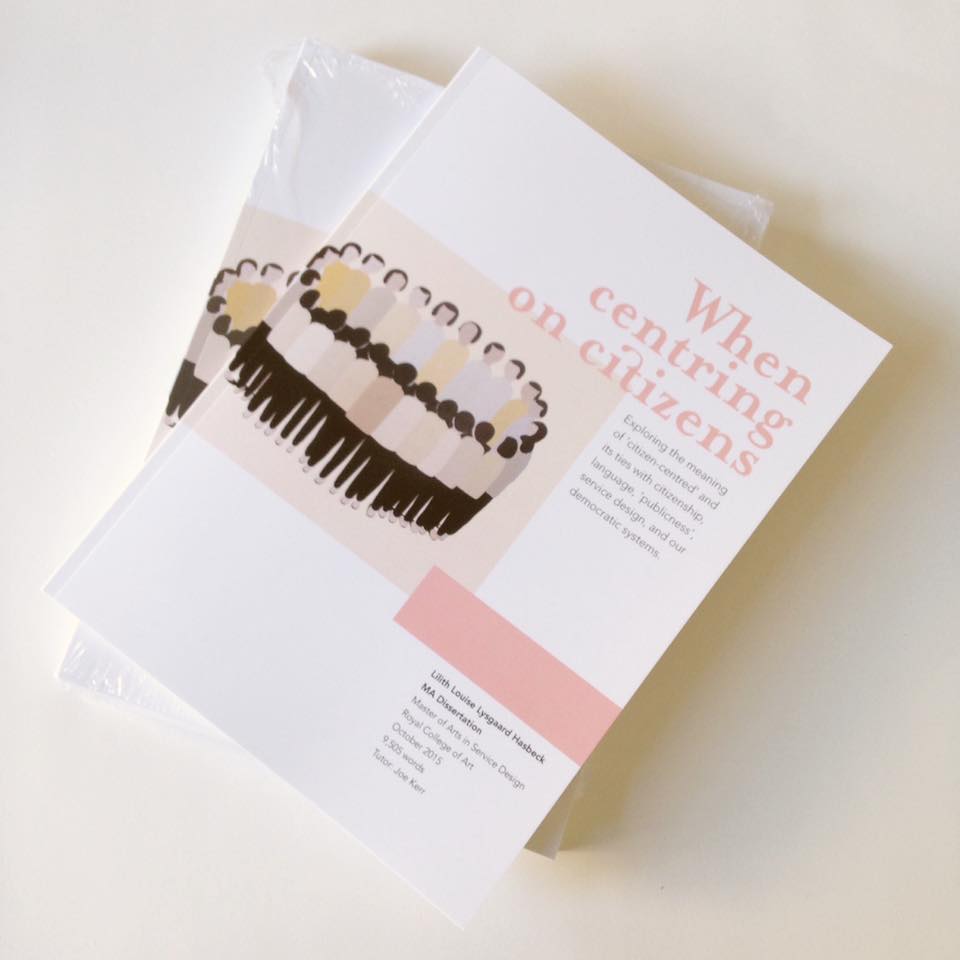 Looking back, there’s no doubt that the co-design course I did as part of my BA at the Royal Danish Academy of Fine Arts changed the direction of my career. And for that I’m grateful. During my time at the Royal College of Art, I’ve had a great many chances to do some really fascinating projects with some lovely partners. I’ve not only come to understand my discipline a great deal better; I’ve also learned about twin disciplines, such as urban design, and architectural co-design. And I’ve had a chance to take a step back and explore peripherally relevant subjects. For instance, my dissertation (which was awarded a distinction) is an almost 10.000 word exploration of what it means to be citizen-centred. If you’re a designer interested in public sector work, like me, you’ll likely have come across the term ‘citizen-centred’. I was looking to explore what this means and refers to today as well as what it could or should mean in the future. What makes citizen-centred different to user-centred? What makes a citizen, and what constitutes a user, or a client, stakeholder, or customer? As part of this, I explored typologies of roles in a public sector context; how do these roles differ and come together – and not least, what do we need to keep in mind when designing both for and with such people and situations.

As recently as last week, I moved back to Copenhagen (although I’ll be working up North, at Coloplast), and I’ll come back many experiences richer. So for now, all that’s left to say is: Thank you for this time, London; I’m sure I’ll see you again in not too long.